This entry was posted on February 28, 2015 by Theresa Frassrand.

St. Joseph's humility and obedience to God in the exact fulfillment of his duties is what makes him a model in heroic virtue. 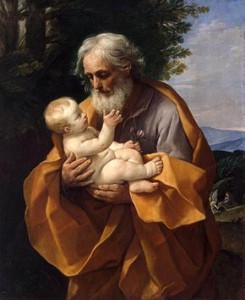 St. Joseph is the model of heroic virtue.  So much so, that he has a whole month every year in his honor, as well as multiple feast days.

March is the official month of  St. Joseph, with March 19th being especially dedicated to him, as the husband of Mary.  When he was engaged to Mary, and when he learned about her pregnancy -- they were a chaste couple -- he considered breaking up with her.  An angel appeared to him in a dream and told him that Mary had not sinned against him; the child was conceived by the Holy Spirit and would be the Saviour of the world.  St. Joseph then stayed with Mary and protected her and Jesus his whole life.  His role in their life was absolutely necessary for the Incarnation.  For at that time, Jewish law would have required that Mary --pregnant outside of wedlock-- be stoned.

May 1st celebrates St. Joseph the Worker.  St. Joseph was considered a "just man" and earned his living as a carpenter.  A carpenter's life was not glorious, and he lived in daily simplicity providing for the needs of his family. 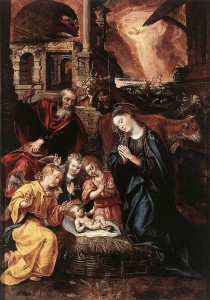 The Sunday after the Nativity of the Lord also gives St. Joseph special heed. It is the feast of the Holy Family. Every family has a protector, and the holy family was no exception. In Jesus' infancy, St. Joseph was awoken by an angel and told to flee with his family into Egypt because King Herod wanted to kill Jesus. He did this immediately. Later, when it was safe (King Herod had died) St. Joseph brought them back to Nazareth.  He also helped Mary find Jesus, when they had lost him at the age of twelve. (Jesus had stayed behind at the temple to do his Father's work.) Also, this feast honors St. Joseph's patronage as adopted father of Jesus Christ. It is through St. Joseph's genealogy that many Christ types were promised a Saviour in their lineage, such as Abraham or King David. This adoption  also represents our Divine adoption into the family of the Trinity when we are baptized.

St. Joseph's exact death is not known, but it is universally accepted that he died before Jesus' public ministry began.

Overall,  St. Joseph is considered the protector of the Catholic Church and families. Many countries have likewise adopted him as their protector.  In fact, recently, Pope Francis had his name added to three of the Eucharistic Prayers.

This entry was posted in Patron Saints and Angels on February 28, 2015 by Theresa Frassrand. ← Previous Post Next Post →