This entry was posted on April 18, 2014 by Theresa Frassrand. 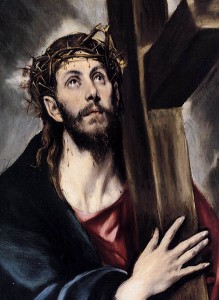 Every year the Catholic Church meditates on the brutal tortures that Jesus Christ underwent on the day that He died; however, it seems ironic that the commemoration of a barbaric trial, and crucifixion would be called “good”.  Would it not be more appropriate to call this day, “Horrific Friday”? For this is what happened on that original day:  Jesus was arrested and imprisoned; a crown of thorns was pounded into His head; He was mocked, spat upon, and beaten; He was taken to trial; was scourged to the limit on the back, shoulders and legs; He was forced to shoulder one of wooden beams that He was to die on, and He had to carry it publicly through the streets of what is now Via Dolorosa (the Way of Sorrows); He fell three times; He was stripped of His clothes; He was nailed hand and foot to the cross; vinegar was pressed to His lips; and once He did die, His heart was pierced by a lance.  Again, what is good about any of this?

Some consider that it is good because the Passion had three main ends:

1)     It was the only way to merit freedom from sin and death for the human race: “His most Holy Passion on the wood of the cross merited justification for us.” (Council of Trent: DS 1529) “Hail, O Cross our only hope.” (LH, Lent, Holy Week, Evening Prayer, Hymn Vexilla regis);

2)     Original Sin, the Incarnation, the Passion and the Resurrection allowed for a greater good— it raised up man’s nature: “There is nothing to prevent human nature’s being raised up to something greater, even after sin; God permits evil in order to draw forth some greater good; and the Exultant sings, ‘O happy fault, . . . which gained for us so great a redeemer.” (St. Thomas Aquinas, Summa Theologica III, 1, 3, ad 3);

3)     It’s a call to action based on example— love is a more excellent way:  From Jesus’ own lips, and on the night before He died, He said: “Greater love has no man than this that a man lay down his life for his friends. You are my friends if you do what I command you.”  (John 15:13-14)   He also said that, “Whosoever wants to be My disciple must deny himself and take up his cross daily and follow me.”  (Luke 9:23)  Jesus did exactly what He commanded others to do—to completely die of Himself— for this He was born. (John 18:37-38) St. Peter, the successor of Jesus, who later was himself, said, “For to this you have been called, because Christ also suffered for you, leaving you an example that you should follow in His footsteps.”  (1 Peter 2:21)

These three reasons that consider the sufferings of Christ to be both necessary and good allow for the title of Good Friday for on this day of immense suffering, the world was redeemed. “Truly, truly I say to you, you will weep and lament, but the world will rejoice; you will be sorrowful, but your sorrow will be turned into joy.” (John 16:20)