This entry was posted on January 16, 2014 by Theresa Frassrand.

The Hail Mary prayer is mostly known for being the main prayer in the Rosary, though it is often prayed as an individual prayer. It appears in each decade ten times, and at the beginning, three times, for an increase in the theological virtues of faith, hope, and charity. 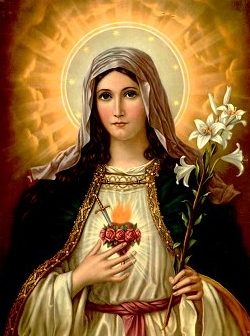 Besides this, the Hail Mary is a testimony of faith—being the most recognized “Catholic” prayer.  No other religion honors Mary to the extent that the Catholics do.  Unfortunately, this love for her is often understood wrongly. Catholics don’t worship Mary; she is not God, but they do recognize her role in salvation.  It is because of her Fiat, her yes to God, that the Incarnation took place.  In other words, she is a key player in redemption.  In particular, she is the new Eve, the woman prophesied in Genesis, and the one spoken of in Revelation.

Genesis 3:15 – And I will put enmity between you and the woman, and between your offspring and hers; he will crush your head, and you will strike his heel.”

Revelation 12: 1-5,17 – And a great portent appeared in heaven, a woman clothed with the sun, with the moon under her feet, and on her head a crown of twelve stars; she was with child and she cried out in her pangs of birth, in anguish for delivery. And another portent appeared in heaven; behold, a great red dragon, with seven heads and ten horns, and seven diadems upon his heads. And the dragon stood before the woman who was about to bear a child, that he might devour her child when she brought it forth; she brought forth a male child, one who is to rule all the nations with a rod of iron. So the dragon was enraged with the woman, and went off to make war with the rest of her children, who keep the commandments of God and hold to the testimony of Jesus.

Because of her role, God gave her an extra grace to help fulfill her mission.  He preserved her from the effects of the original sin, the original curse.  This was necessary because as Jewish cleanliness rites show, God does not dwell in unclean things.  Chosen to be a living tabernacle, Mary’s body needed to be immaculate. Catholics call her preservation from original sin, the Immaculate Conception.

The Hail Mary, honors both her yes and her personal holiness. She is after all, the most perfect model humanity has.  The prayer is traditionally divided into two sections: the first, is often prayed by a single person; and the second, is a response said by all.

The first section is a praise and blessing of Mary as the Mother of God.  In particular, it is a renewal of the salutation that the Angel Gabriel gave Mary at the moment of the Annunciation coupled with the salutation she received from her cousin Elizabeth.

Leader: Hail Mary, full of grace. The Lord is with thee. Blessed art thou amongst women, and blessed is the fruit of thy womb, Jesus.

Luke 1: 28 And he came to her and said, “Hail, full of grace, the Lord is with you!” But she was greatly troubled at the saying, and considered in her mind what sort of greeting this might be. And the angel said to her “Do not be afraid, Mary, for you have found favor with God.  And behold, you will conceive in your womb and bear a son, and you shall call his name Jesus.

Luke 1: 41; And when Elizabeth heard the greeting of Mary, the babe leaped in her womb; and Elizabeth was filled with the Holy Spirit and she exclaimed with a loud cry, “Blessed are you among women, and blessed is the fruit of your womb! ”

The second section is a supplication to Mary—as the most blessed woman ever created (and will ever be created)— to pray for us.  She was able to move her Divine Son, Jesus, to perform his first public miracle at the Wedding of Cana.  (John 2)

All: Holy Mary, Mother of God, pray for us sinners, now and at the hour of our death, Amen.

As the fulfillment of the prophecy in Genesis, Mary’s intercession is powerful; she is the one whom the dragon is unable to defeat. The Hail Mary then, is a treasure to all who wish to be close to God, and who are looking to give their complete surrender (fiat) to His Will.

STEP BY STEP GUIDE how to pray the Rosary

Prayers in The Rosary