This entry was posted on April 17, 2014 by Theresa Frassrand.

Holy Thursday is a specific day in the Church’s liturgical calendar commemorating the actions of Jesus Christ on the night before He died.  Since, Jesus had foreknowledge of His upcoming death, His last hours particularly show Who He Is and what He wanted to leave behind.  These final actions are recorded in the four Gospels: Matthew, Mark, Luke and John. Each sheds light on the final and deliberate moments of Jesus. 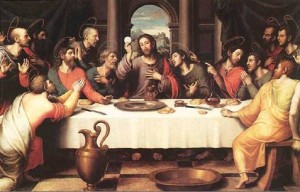 St. Luke has no subtlety in expressing what Jesus desired: “I have earnestly wanted to eat the Passover with you before I suffer; for I tell you I shall not eat it until it is fulfilled in the kingdom of God.” (Luke 22:15-16)  After the Passover, in the Mount of Olives, the word, earnestly, appears once more: “in agony, He prayed more earnestly; and His sweat became like drops of great blood falling down upon the ground.” (22:44)  This phenomena of sweating blood only happens when one is under great duress.   If Jesus acted deliberately, why would the Passover be sought anxiously and what later caused such agony in Jesus?

St. Luke and St. Mark describe the Passover as something to be sacrificed: “Then came the day of Unleavened Bread, on which the Passover had to be sacrificed.” (Luke 22:7)  This was to show that something significant happened when Jesus broke the bread: “This is My Body which is given for you. Do this in remembrance of Me.” (Luke 22:19) “And He took a cup, and when He had given thanks He gave it to them, and they all drank of it. And He said to them, ‘This is the Blood of My Covenant, which is poured out for many. Truly, I say to you, I shall not drink again of the fruit of the vine until that day when I drink in new in the kingdom of God. ’” (Mark 14:22-26) When Jesus later goes to the Mount of Olives, St. Mark adds to St. Luke’s account that Jesus prays not once, but three times: “remove this cup from me; but not as I will but as Thou wilt” (14:36). The repeated prayer should be not passed over; it is an indication that the “cup” is vital to covenant-making; another drink must occur to bind the new covenant, and this is the cause of the great anguish.

The anguish makes sense from the Jewish standpoint: yearly, the people had to kill a lamb and eat it with unleavened bread.  This lamb’s blood would be sprinkled on the doorposts of all Israelite houses.  And “you should observe this rite as an ordinance for you and your sons forever.” (Exodus 12:24) Thus, when Jesus said that the bread was His Body, He meant that He is the new lamb; when He said that the wine was His Blood and would be shed for many, He meant that His crucifixion would take the place of the sprinkling of blood on the doorpost.  And when He said, “Do this in memory of Me”, He meant for this to rite to be perpetual and would fulfill the old one. And if there was any doubt about this, St. Matthew in his Gospel included the words: “for the forgiveness of sins” (26:28).  The forgiveness of sins can only happen by the killing and eating of the Passover lamb: now Jesus.

Furthermore, the words that Jesus spoke to establish the new covenant were mirrors of Moses’: “Behold the Blood of the Covenant which the Lord has made with you in accordance with all these words.”  (Exodus 24:8-9) This was a binding of the people to the Ten Commandments to establish that they were a people “set apart”.  In St. John’s Gospel this mirroring extends even to the giving of a new command: “This is my commandment, that that you love one another as I have loved you. Greater love has no man than this that a man lay down his life for his friends. You are my friends if you do what I command you.” (John 15:12-14)

From all four Gospel testimonies, it is evident that Jesus earnestly desired to establish a new everlasting covenant with His disciples.  In it encompassed a new command focused in love.  The anguish that came preceding a foreknown and torturous death was natural, but Jesus saw that it was necessary.  The giving of His Body in death was a vital part of this covenant: the proof of what love is.