This entry was posted on April 14, 2015 by Theresa Frassrand. 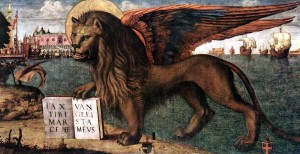 The Gospels are probably the most important written works of all of Christianity.  It is from their words, that the Word of God has been carried in writing to millions of people throughout the centuries.  Each of these writers is represented by a creature.

As one of the four Gospel writers, and one of the seventy disciples of Jesus Christ, Saint Mark is considered by the Church to represent the Lion.  This was taken from a vision seen by the Prophet Ezekiel around 625 years B.C.:

More than 600 years later, Saint John the Evangelist in his  book "Revelations" has a parallel vision:

Saint Mark is known as a lion for two reasons: 1) He describes Saint John the Baptist as a lion, "crying out in the wilderness"; and 2) because Jesus saved Saint Mark and his father from being attacked by lions after the Resurrection when they were on their way to Jordan. St. Mark's father converted to Christianity.

Saint Mark is the patron of notaries and is also known for having established a Church in Alexandria.

This entry was posted in Patron Saints and Angels on April 14, 2015 by Theresa Frassrand. ← Previous Post Next Post →