This entry was posted on February 5, 2015 by Theresa Frassrand.

Saint Valentine is infamous because of the holiday that surrounds his name. 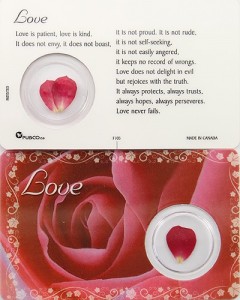 Cards. Gifts. Flowers. Romantic feats.  These are expected by lovers to be given every February 14 -- St. Valentine's Day. But who is the man behind the tradition of offering signs of love?

There are many Saint Valentines recognized by the Catholic Church, including a woman. (Her name was St. Valentina.)

The identity celebrated on this famous day is a man who lived in the third century. He is thought to have died around A.D. 270.  In fact, Saint Valentine was a prisoner of the State and eventually beheaded. His was sentenced to death because he had married Catholics. This was during a time when it was illegal to be a Catholic.  It is no surprise then, that as a priest, and a martyr for celebrating marriage, Saint Valentine is now the patron of engaged couples and happy marriages.

However, his true identity was questioned as early as A.D. 496 by Pope Gelasius I, who referred to the martyr and his acts as “being known only to God.”  Since the true identity of St. Valentine is ambiguous, "the Church discontinued liturgical veneration of him in 1969, although his name remains on her list of officially recognized saints". (History Channel, 6 Surprising Facts About St. Valentine) In fact, some believe that the fourteenth century poet, Geoffrey Chaucer, started the culture of romantic gift giving on Saint Valentine's day.

Despite the discontinuation and vague historical origins of Saint Valentine, himself, it is good to celebrate marriage. Dying for the sacrament of marriage is incredibly honorable. How many spouses die of themselves for each other? Expressions of appreciation and commitment should be made every day of the year.

Instead of flowers or chocolate that last a short time, consider giving gifts that last. Give reminders that do not age. Give yourself. Give kindness. Give forgiveness.

This entry was posted in Patron Saints and Angels on February 5, 2015 by Theresa Frassrand. ← Previous Post Next Post →