This entry was posted on April 27, 2014 by Theresa Frassrand. 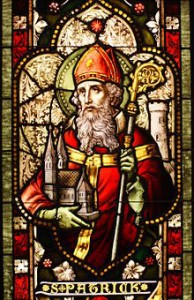 In America, March 17th is St. Patrick’s Day.  Parades are held; Irish food is served; and people adorn green on the threat of being pinched. But who is St. Patrick?  And why do we celebrate him?

St. Patrick was born in Roman Britain and lived around the fifth century.  As a teenager, he was captured by pirates and brought to Ireland as a slave, where he was forced to work as a shepherd.  It was during this captivity that St. Patrick had a deep spiritual awakening.  In a locution he was told that he needed to escape his slavery.   He listened to this voice, snuck away to a seaport, and convinced a captain to take him aboard.  Once safely back to Britain, St. Patrick began to study Christianity, and then specifically for the priesthood. He eventually became a Bishop.

Years later, he had a vision that urged him to return to Ireland, the place of his captivity, and free the inhabitants from a deeper type of slavery: sin.  He started with himself.  Having experienced the mercy of God in his own soul, he forgave his captors, and this enabled him to devote his life to the conversion of the Druids and pagans of Ireland. Though he baptized thousands of persons, he did it at personal risk.  At times, he was beaten, robbed, re-enslaved, and threatened with execution by local authorities.

St. Patrick, is the Patron of Ireland, and most identified with the Shamrock (three-leaf clover) and the Celtic Cross.  Due to his captivity, St. Patrick became immersed in the language and culture of the Irish.  Instead of abolishing the traditions of the native people, he wisely used what they had and loved to show the truths of Christianity.  Taking the nature around him, specifically, the three leaf clovers, he taught the Trinity: three distinct Persons in One God.  Considering the reverence they had for the sun, that is, for their sun-god, St. Patrick placed an image of the sun on the Cross to represent the “Son of God”.  This design is the famous and beloved Celtic Cross.

St. Patrick touched the lives of so many persons and so influenced a nation, that sixteen centuries later, he is remembered and honored, not only in that nation, but all throughout the world.  His love for God, and mission of conversion unites – for on St. Patrick’s Day, everyone in the world is Irish.