Menu
Shop our Specials - Discounts up to 55%  more info!

The Stations of the Cross

This entry was posted on April 18, 2014 by Theresa Frassrand. 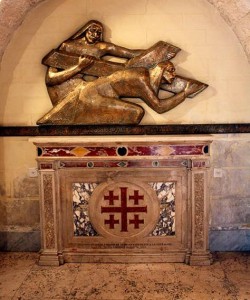 The Stations of the Cross are traditionally used during Lent (especially on Fridays) as a way to go deeper into the mystery of the passion, death and burial of Jesus Christ.  It looks both at Mary’s journey on the Via Dolorosa (Way of Sorrow)— where the Passion actually occurred, and at the major events as recorded by the Apostles in the Gospels.

“Behind the house, at a little distance up the hill, the Blessed Virgin had made a kind of Way of the Cross. When she was living in Jerusalem, she had never failed, ever since Our Lord's death, to follow His path to Calvary with tears of compassion. She had paced out and measured all the distances between the Stations of that Via Crucis, and her love for her Son made her unable to live without this constant contemplation of His sufferings . . .  At first she went by herself, measuring the number of steps, so often counted by her, which separated the places of Our Lord's different sufferings. At each of these places she put up a stone, or, if there was already a tree there, she made a mark upon it.  . . .  Afterwards she arranged the Stations better, and I saw her inscribing on the stones the meaning of each Station, the number of paces and so forth.  . . . At that time I saw no picture and no fixed cross to designate the Stations, nothing but plain memorial stones with inscriptions, but afterwards, as the result of constant visits and attention, I saw the place becoming increasingly beautiful and easy of approach. After the Blessed Virgin's death I saw this Way of the Cross being visited by Christians, who threw themselves down and kissed the ground.” (The Life Of The  Blessed Virgin Mary From The Visions Of  Venerable Anne Catherine Emmerich,)

Pilgrimages to venerate the Via Dolorosa have since drawn an innumerable amount of visitors, and still there are many more who are unable to personally visit.  For these people, the Via Dolorosa is brought into one’s local Church or home through artistic representations of the original events and places; this practice was spread mainly by the Franciscans in the fourteenth century.  The devotion asks for a deliberate pause, that is, a resting in each event.  Generally, there are actual physical stations set up where one can make an external act of reverence (such as genuflecting or touching the statue/engraving) to represent the interior reverence and conversion of heart, but many simply meditate on illustrations.

To pray the Stations of the Cross, the title of every station is acknowledged and reflected upon. Before moving to the next station, the following prayer is said: “We adore You, O Christ, and we bless You, for by the Holy Cross, You have redeemed the world.”   And the Our Father, Hail Mary, and Glory Be are also prayed.

The fourteen stations are:

Stations of the Cross - Crucifixes

This entry was posted in Prayers and tagged catholic prayers, prayer, lent, lenten, Crucifix, Stations of the Cross on April 18, 2014 by Theresa Frassrand. ← Previous Post Next Post →