The Sufferings and Wounds of Jesus Christ

This entry was posted on April 14, 2014 by Theresa Frassrand. 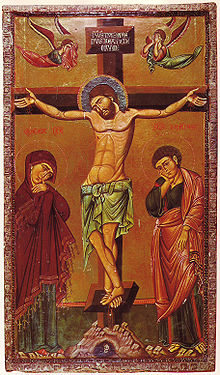 When we look at a crucifix, Jesus’s body often looks fairly clean.  We see a white or tan body with five obvious wounds: crown of thorns, pierced side, pierced hands and feet.  There might be some drips of blood to emphasis the violence of the crucifixion. Missing mostly likely are the marks from the scourging on His back, shoulders, and legs.  These wounds are assumed— being well known from the Scriptures (John 19:1; Matthew 27:26)— and artistically avoided, despite the fact that the scourging accounts for most of the wounds that Jesus received.  Traditionally, it is held that Jesus suffered from 5,480 wounds (as revealed to St. Bridget of Sweden).  Among these, there is one wound that is not often promulgated.  This wound is on Christ’s shoulder:

“It is related in the annals of Clairvaux that St. Bernard asked Our Lord which was His greatest unrecorded suffering, and He answered: "I had on My Shoulder while I bore My Cross on the Way of Sorrows, a grievous Wound which was more painful than the others, and which is not recorded by men. Honor this Wound with thy devotion, and I will grant thee whatsoever thou does ask through its virtue and merit.  And in regard to all those who shall venerate this wound, I will remit to them all their venial sins, and will no longer remember their mortal sins.”

Since it is through the Passion, Death and Resurrection of Jesus that mankind is given new life, each wound and each drop of blood is significant, and revered.  The Catholic Church honors the moment in history when His Blood was shed and holds dear, the perpetuity of the sacrifice.  Every day in the Sacrifice of the Mass., she earnestly obeys Christ’s command to remember the gift of His Body (Luke 22:19).  For personal reflection, she also has a wealth of chaplet devotions and individual prayers that are said in honor of each suffering.  In fact, the Saints have reflected on the physical traumas that Jesus’ body underwent, even categorizing them by the bodily senses.

“Moreover, He suffered in all His bodily senses: in touch, by being scourged and nailed; in taste, by being given vinegar and gall to drink; in smell, by being fastened to the gibbet in a place reeking with the stench of corpses, ‘which is called Calvary’; in hearing, by being tormented with the cries of blasphemers and scorners; in sight, by beholding the tears of His Mother and of the disciple whom He loved." – St. Thomas Aquinas, Summa Theologica

Jesus also suffered from mental and spiritual anguish, so much so, that in the Garden of Gethsemane, His capillary glands ruptured (a medical condition called Hematohidrosis) causing Him to sweat drops of blood.  Besides this, in the Passion itself, Jesus suffered abandonment, betrayal, false accusations, sadness, weariness, humiliation and rejection. Generally speaking He endured every suffering that man can experience; there is no suffering that He did not Himself undergo to some degree.   And He freely chose to endure these tortures.

What is it we love in Christ - his crucified limbs, his pierced side, or his love? When we hear that he suffered for us, what do we love? Love is loved. He loved us, that we might in turn love Him [and others]. - St. Augustine

And He said to all, "If any man would come after me, let him deny himself and take up his cross daily and follow me. For whoever would save his life will lose it; and whoever loses his life for my sake, he will save it." - Luke 9:23-24

Through His Wounds We Are Healed

This entry was posted in Our Lord and tagged Rosary, catholic, catholic prayers, Jesus Christ, Crucifix, Suffering on April 14, 2014 by Theresa Frassrand. ← Previous Post Next Post →