This entry was posted on June 16, 2014 by Theresa Frassrand. 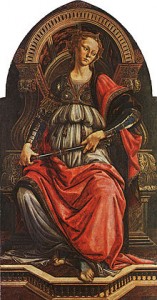 Imagine that you are on a battlefield. There are men fighting in close combat: sword to sword. As you take in your surroundings, you notice that one man is running into battle swinging his arms around and boldly attacking. He opens his body up in a very vulnerable way, taking no account of his own personal peril. He is stabbed and falls to the ground. You are shocked at the lack of conscious personal preservation.

You also notice another man. He is of a different sort altogether. Hiding behind a massive rock, you see him trembling; he makes no effort to join the battle or to even navigate safely through to advance with his countrymen. He is paralyzed by his own fear and doesn’t notice an enemy sneaking up behind him. He is fatally wounded. His cowardice killed him.

Another man captures your attention. He moves with caution, but every step is confident. He attacks the enemies closest to him, and takes shelter often, moving with his battalion; he is aware of what is going on around him, neither making himself unnecessarily vulnerable, nor abandoning his duty. His actions are wise and his survival more likely.

Of these observed men, Aristotle would say that the last is “the virtuous man”. For he is “the mean between extremes,” that is, he is neither foolhardy, nor is he a coward. Though he may have fear, he still advances. In fact, his fear gives him wisdom to protect himself. His fear is natural, but not excessive. Because he is able to work through and overcome his fear in a self-protecting way, he is considered to be “a courageous man”. Courage overcomes. Courage is a virtue.

Virtues are actions that are not extreme; being the balance, they demonstrate order, and thus, an excellent soul. Virtue is doing the right thing, at the right time, in the right way, in the right circumstances. They are often classified in two main categories: natural (prudence, justice, fortitude, and temperance), and theological (faith, hope, and charity). But what is “right”?

The Catechism of the Catholic Church holds that “right” is the consideration of “the good” and acting towards it. She quotes St. Paul’s advice as a guide: “Whatever is true, whatever is honorable, whatever is just, whatever is pure, whatever is lovely, whatever is gracious, if there is any excellence, if there is anything worthy of praise, think about these things.” (CCC 1803 & Phil 4:8) The Church offers actions to strive for: joy, peace, patience, kindness, goodness, generosity, gentleness, faithfulness, modesty, and chastity.

If you find you lack any of these, consider the possible extremes that challenge them, and then try to eliminate the extremes in yourself. For instance, temperance is self-control in regard to the passions, such as, eating the right amount. Too much is gluttony and it’s consequences are health and weight problems, while eating too little also has its own adverse effects. But if you eat for nutrition and also eat the correct portions for your body, you will have better health – this daily control is virtuous, excellent living.

“Excellence is an art won by training and habituation. We do not act rightly because we have virtue or excellence, but rather have those because we have acted rightly. We are what we repeatedly do. Excellence, then, is not an act but a habit.” – Aristotle

This entry was posted in Everyday Life and tagged catholic, catholic blog, every day life on June 16, 2014 by Theresa Frassrand. ← Previous Post Next Post →