An Examination of the Prayer, Hail Holy Queen

This entry was posted on April 1, 2014 by Theresa Frassrand.

The prayer, Hail Holy Queen, is most known for being one of the ending prayers for the Rosary. It is said after the last decade. It is also one of the four antiphons of Mary. 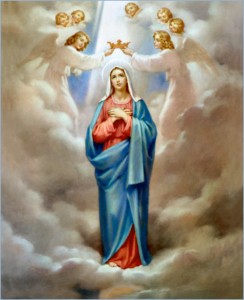 Traditionally it is divided into three responses. In the first and third part, all participants pray in unison; and then the second part, only the leader responds.

There are different accounts of the origins of the Hail, Holy Queen.  However, the general consensus among Catholic sources is that this prayer was composed between the 11-12th centuries. Nevertheless, the titles and honor given to Mary were not new then.  Rather, they were beloved traditions that were put together beautifully as a hymn of praise and intercession. Let’s look at the prayer’s scriptural origins:

Revelation 12:1; A great sign appeared in heaven: a woman clothed with the sun, and the moon under her feet, and on her head a crown of twelve stars.

This opening salutation mimics the one given by the Angel Gabriel to Mary, who  finding favor with God can not be anything except “holy”.  The queenly woman in Revelations is a vision of Mary, who is seen as the Mother of the child who will defeat the dragon.

Mother of mercy, our life, our sweetness and our hope.

While on the Cross, Jesus gave His Mother to His beloved disciple, St. John.  He likewise, gave her to him.  St. John represented all of humanity— Mary then is our Mother too.  As the model of all mothers, Mary is merciful, and is a source of life, sweetness and hope to all of her children.

To thee do we cry, poor banished children of Eve: to thee do we send up our sighs, mourning and weeping in this valley of tears. Turn then, most gracious Advocate, thine eyes of mercy toward us, and after this our exile,

Genesis 3:15 – And I will put enmity between you and the woman, and between your offspring and hers; he will crush your head, and you will strike his heel.”

Revelation 12: 17 – So the dragon was enraged with the woman, and went off to make war with the rest of her children, who keep the commandments of God and hold to the testimony of Jesus.

Mary is the new Eve, and restored (by means of her Fiat) what was lost when we were banished from Eden.  She will comfort our sighs, mourning and weeping; she freed the human race from the exile when she chose to participate in the Incarnation.  Even now, she assists us in our personal exiles. Through her intercession, she still steps on the head of the serpent.

Luke 1: 28, 41; “And behold, you will conceive in your womb and bear a son, and you shall call his name Jesus… Blessed are you among women, and blessed is the fruit of your womb! ”

Mary always points to Jesus. She never points to herself. Her Son makes her who she is.

Leader: Pray for us, O Holy Mother of God

All: That we may be worthy of the promises of Christ.

Mary was perfectly obedient to the Will of God. Who better than to ask for guidance to participate worthily in the life of Christ? She is the perfect model and her son honors her requests. (John 2)

STEP BY STEP GUIDE How to Pray the Rosary

Prayers in the Rosary