This entry was posted on February 13, 2014 by Theresa Frassrand.

A pectoral cross is a cross hanging on a chain that religious officials (such as the Pope and bishops) wear resting on their chest to represent their ecclesiastical power. Its name comes from the Latin, “pectoralis” meaning “of the chest”.  The tradition may have arisen as early as the fifth century, but its commonly agreed that its popularity heightened in the eighteenth century. This cross is often made out of platinum, gold, or silver. 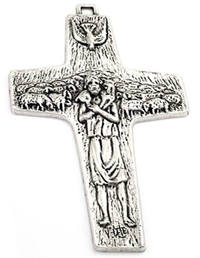 Pope Francis’ pectoral cross is the one that he wore as Archbishop of Argentina; it is silver and is not made by a goldsmith from the Vatican, but it is a work of a small artisan master craftsmen, Giuseppe Albrizzi, an Italian from Vidigulfo Manenti. However, as Albrizzi explains himself, the design of the cross was made by his teacher, the sculptor, Antonio Vedele. "The cross was made by me, but it was drawn by my teacher, Antonio Veldele, for whom I worked until 1978. I am grateful for everything he had taught me, the teacher who created the cross of Pope Francis"

Giuseppe claims that the cross that Pope Francis adorns was made in his workshop: "I recognized it immediately as soon as the Pope came out on the balcony. Around his neck he wore my silver cross."

The pectoral cross depicts the “Good Shepherd” who walks among the humble. It was inspired by what Jesus said about Himself: "I am the good shepherd; the good shepherd lays down His life for the sheep.” (Jn 10:11)  And by the prophecy of Isaiah: “He tends his flock like a shepherd: He gathers the lambs in his arms and carries them close to his heart; he gently leads those that have young.” (40:11)

Giuseppe Albrizzi, says of the symbolism: "All unique pieces have great symbolic significance: ‘The objects should be understood not only by the wearer, but also by those who see them and they can then transpose the meaning. Unfortunately today many do not understand the religious symbolism."

The Good Shepherd is a good imagery for Pope Francis because he is a model to the Church for joy and forgiveness; this attitude is not far from the mercy shown to St. Peter, who was the first Pope. In fact, Jesus used the same imagery of the Good Shepherd when He confirmed the Papacy. Having given St. Peter the authority of His Church (Matthew 16:18), and St. Peter, in his weakness, having denied Jesus three times (John 18:15-27), Jesus gave St. Peter a chance to redeem himself.

So when they had eaten breakfast, Jesus said to Simon Peter, “Simon, son of Jonah, do you love Me more than these?”

He said to him again a second time, “Simon, son of Jonah, do you love Me?”

And he said to Him, “Lord, You know all things; You know that I love You.”

Jesus said to him, “Feed My sheep. Most assuredly, I say to you, when you were younger, you girded yourself and walked where you wished; but when you are old, you will stretch out your hands, and another will gird you and carry you where you do not wish.” This He spoke, signifying by what death he would glorify God. And when He had spoken this, He said to him, “Follow Me.” (Jn 21:15-18)

In asking St. Peter three times, “Do you love me?”, Jesus was reconciling each of the three times that St. Peter denied Him, and then He predicted St. Peter’s martyrdom: for all shepherds must lay down their life for their flock.  Thus, in addition to mirroring the traditional beauty of the role of the shepherd, Pope Francis’ pectoral cross is a symbol of hope, mercy, joy, forgiveness and love that Jesus has for the entire Church and world.