The Apostles Creed - An Examination

This entry was posted on January 16, 2014 by Theresa Frassrand.

The Apostles Creed is the first prayer of the Rosary.

It is an important prayer in the life of the Catholic Church.  Not only is it a summary of the life of Jesus Christ, but an acceptance of the mysteries expressed.  It details the core beliefs of Catholics since the first century; the doctrines are fulfillment of the ancient Jewish prophecies. Each word is key and nothing in it is superfluous.  In fact, the Catechism of the Catholic Church has an entire part devoted to examining the Creed’s depths.

This article is a brief glance at the prayer, which includes key Scripture verses, and cursory explanations.  The hope here is to inspire further research. 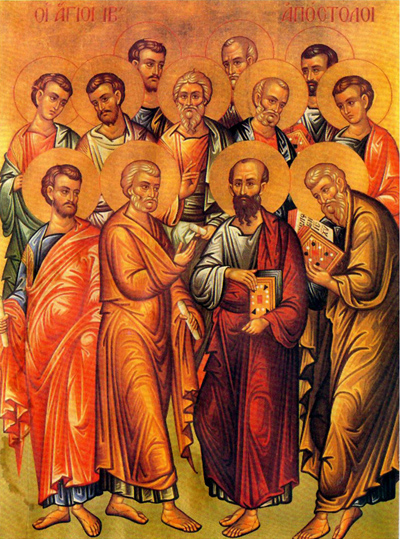 I believe in God, the Father Almighty, Creator of Heaven and earth;

Genesis 1:1, 26 : “In the beginning God created the heavens and the earth… Then  God said, “Let us make man in our image, after our likeness;”

This first line proclaims God as He, Who Is Uncreated.  However, Genesis suggests by the plural language “our” and “us”, a collaboration in the creative act.  But since there is only one God, a clarification is needed.  It is found in the next line.

and in Jesus Christ, His only Son Our Lord,

John 1:1- 3, 14; In the beginning was the Word; the Word was with God and the Word was God. He was with God in the beginning. Through Him all things came to be, not one thing had its being except through Him. . . The Word became flesh and made his dwelling among us. We have seen his glory, the glory of the one and only Son, who came from the Father, full of grace and truth.

Thus, while there is only one God, this Scripture shows that there are distinct Persons in God: the Father and the Son (Word). The Son existed uncreated since the beginning of time. And then in time, He became flesh.  How this came about is given is next.

Who was conceived by the Holy Spirit, born of the Virgin Mary,

Luke 1:35  “The Holy Spirit will come upon you,  and the power of the Most High will overshadow you;  therefore the child to be born will be called holy,  the Son of God.”

A marriage between God and woman takes place.  A new Person is introduced here: the Holy Spirit, who is clearly a distinct Person from the Son (Word), and though less clear here, also distinct from the Father.

The clause “born of the Virgin Mary” should not be casually passed over.  Her virginity was essential for the Word to become flesh.  Jesus’ humanity was given through her, hence she had to be virginal physically, emotionally, spiritually, etc.,.— free from the stains of sin.

suffered under Pontius Pilate, was crucified, died, and was buried.

Matthew 27: 1-2, 22, When morning came, all the chief priests and the elders of the people took counsel against Jesus to put him to death; and they bound

Why did the Word become flesh? The fall of man (Gen 3:15) separated us from God and sentenced us to eternal death.  In order for any redemption to take place, there had to be a fitting recompense.  Man was too unworthy, but God as man wasn’t.

Pontius Pilate is noted in order to place the exact moment in history when all this occurred; a reminder that this Creed is an account of facts.

He descended into Hell; the third day He rose again from the dead;   He ascended into Heaven, and sits the right hand of God, the Father Almighty; from thence He shall come to judge the living and the dead.

Acts 7:55; But being full of the Holy Spirit, he gazed intently into heaven and saw the glory of God, and Jesus standing at the right hand of God;

2 Tim 4:1; I solemnly charge you in the presence of God and of Christ Jesus, who is to judge the living and the dead.

Jesus descended into Hell only to rise again, showing His power over death, proof of His divinity; only God could do this. Now in heaven, having being glorified, He is the judge of all creation.

I believe in the Holy Spirit,

John 7: 33; By this he meant the Spirit, whom those who believed in him were later to receive. Up to that time the Spirit had not been given, since Jesus had not yet been glorified.

Although the Holy Spirit was mentioned previously, He is stated here to be clear that He is the Third Person in God.

the holy Catholic Church, the communion of saints, the forgiveness of sins, the resurrection of the body and life everlasting.  Amen.

Before Jesus ascended into heaven, He left a visible body of members to carry on His work. He gave Peter charge over it.  When Peter was no longer able to carry this mission because of impeding age and martyrdom, he likewise handed his power over to his successor. And his successor did likewise, and this apostolic succession and mission to evangelize has continued to this day.

The power to “loose and bind,” that is to forgive sins extends to heaven, showing that there is life after death, and that no soul goes out of existence. All souls will one day be reunited with their bodies. Those happy with God are considered among the Communion of Saints.

STEP BY STEP GUIDE how to pray the Rosary

Prayers in The Rosary